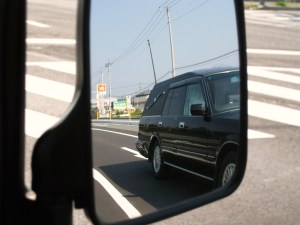 You just keep driving you!

double note: Hearses seem to get a lot of body work.

triple note: from Wikipedia our friend:

The name derives from the Old French herce “rake, harrow”, describing the temporary framework on which candles were placed above the bier. This also held banners and armorial bearings and other heraldic devices. Verses or epitaphs were often attached to the hearse. Applied to vehicles since the 17th century.

Check out Wikipedia for more info on hearses here. It’s quite interesting actually. I’m not macabre or from any other Scottish Clan.

quadruple note: apologies for putting on two car related entries in a row. Sometimes that’s the way the ball crumbles or the cookie bounces.