When I’m Not Blogging, I Possibly Visited … (Part 1)

It was a hard 7 day week of travel: most of the places I visited were 5 or 6 traffic jams away from each other.
Sure Japan looks small on a map, but when you are here it’s a lot bigger.

Like any good trip in my van, it started with a trip to the hardware store for cheap oil to replace the other cheap oil I burn off while driving at highspeeds of up to 75 mph/120 km per hour … sometimes in only 50 or so minutes.

Two hours in to the voyage the van suffered a flat tire … conveniently in a “Road Side Service Area” with a gas station that had a hydraulic jack I could borrow: my jack wasn’t worth … jack.

midnote: this bike is not my van, but I feel it’s pain.

midnote note: this car isn’t my van either.

After that it was smooth sailing on 3 winter and 1 summer tire for the rest of the trip: the van was unseasonably well equipped I guess.

I was there at the same time last year. I stayed at the same hotel and they even remembered me … probably because I was wearing the exact same clothes as last year … sadly  … or maybe because they could finally collect the money I owed from the mini-bar bill left unpaid.

another midnote: I don’t usually go to mini-bars … they are small and cramped.

another midnote note: I didn’t really have an unpaid mini-bar bill. I just like the idea of hanging out in a mini-bar. 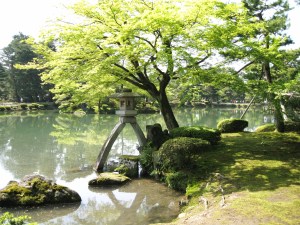 Known for one of the 3 best gardens in Japan (excluding mine), Kenrokuen  is pretty cool. 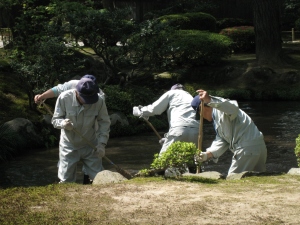 NO! You are not doing it right! Once more from the top! 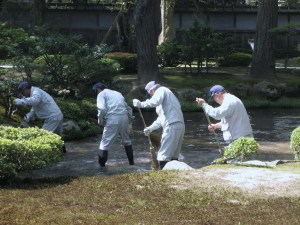 I revisited the  21st Century Museum  too. Last year there was the amazing Ron Mueck‘s work on display.

This isn’t Ron Mueck’s stuff; it’s something else.
I’m not sure what it is, but it looked like the artist was still working on it.

This is a close up of one section. If you look really closely, it kind of looks like the inside of my head or junk or both or none. It must be the work of a foreign artist because Japan has different electrical plugs.

And that was about it for Kanazawa this year. I had schedules and deadlines to not meet, but try for anyway.

last midnote: I’ll tell you what happens next … next.

last midnote note: oh yeah! There is a castle in Kanazawa as well.

note: I saw the same great roots  as last year at Kenrokuen Garden … and took another picture of them. I am very predictable when I visit places more than once at the same time … … … … of year.

double note: if you don’t know about my love affair with roots, it’s all revealed here.

I’m not much of a Museum person, but I visit the odd one once in a blue moon.

by chance, I saw some of Ron Mueck‘s work in Kanazawa, Japan.

Unbelievable stuff. Life like? I wouldn’t have been surprised if the pieces got up and started walking around. I’m not easily impressed, but this stuff was freaky real: faces, bodies, even the soles of the feet were amazing.

If you have a chance, take a look at his stuff in the flesh. Photos just don’t do it justice.

This is a link to more info and great photos of Ron Mueck’s work.