After the big show on Saturday, I thought Sunday’s offering would prove anti-climactic.  I was wrong.

I collected my program at the entrance, bought a bottle of milk from a vendor, and entered the darkened auditorium.
The place was filled to the rafters with an expectant crowd: many of the women seemed to be expecting more kids soon too!

The hall was humming with excited chatter; while others in the audience just seemed to be humming for some reason.

I thought this must have been what it was like in The Cavern Club in Liverpool before The Beatles came on stage.

In this more intimate setting without seating, the  moshpit area was jammed with people full of excitement, anticipation, and extensive video equipment.

Whereas the Saturday show pandered to an older generation from a few generations ago, this one started with a …

I guess one of the dancers didn’t like floating in his tin can far above the Earth. He seemed blue like planet Earth and there was nothing anyone could do … until they closed the curtain.

There was a bit of The Jean Genie next.  Poor little greenie. 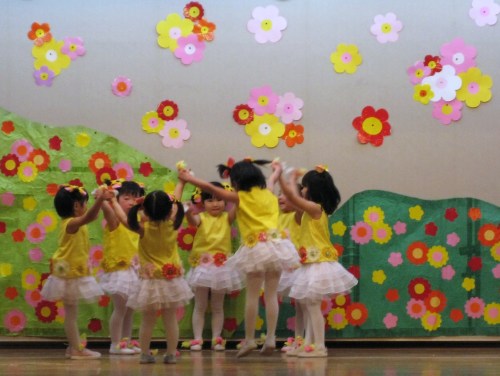 I must have missed this Bowie reincarnation, but it was pretty good anyway. 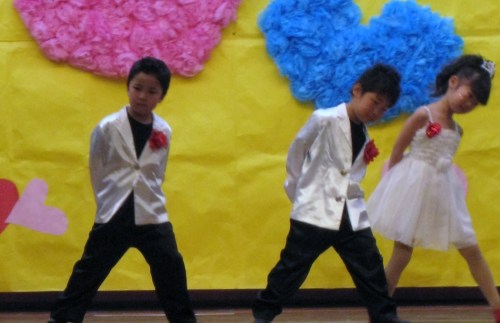 Let’s Dance was next.  It had everyone swaying under the serious moonlight.

It finished up with Blue Jeans.
They didn’t do any of that Tin Machine crap thankfully.

I was a bit disappointed nothing from the Hunky Dory album was done though.

It seemed to seamlessly stream in to a Japanese Pop Music driven section for a while. 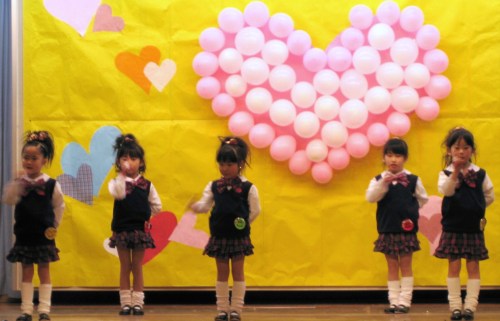 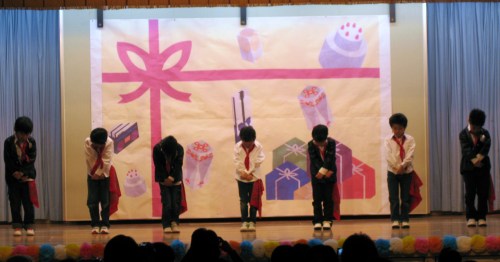 The end of the program got really out of control with some sort of experimental, sci-fi, fantasy, conceptual, re-interpretationalistic routines.

Boys in quasi- Power Ranger costumes doing what they usually do after a few chocolate bars: punch, kick, scream, and run around a lot. 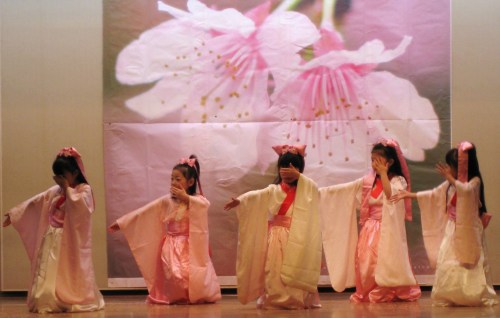 And the finale were some camera shy kimono clad groovers doing something traditional in an attempt to cool down the crowd so they could possibly drive home sensibly and not forget to leave their empty milk bottles with the vendor on the way out.

The performers left it all on the stage … along with a few pompoms and assorted hats.
The 4 to 6 years old kids made their statement:

Hey! I knew The Beatles would show up in some form or another.

There are a lot of big festivals in the world: Carnival, Oktoberfest, Burning Man. The list goes on and on …

and somewhere in the middle of that list is the …

This is the first of the BIG 3 Events on my calendar: the others being the Numata Matsuri  and Kinder-Olympics.    My calendar isn’t very big I guess.

I was lucky enough to get free tickets to not one, but two venues this year.

I hear all of you pulling your hair and screaming “No Way!” and “Some people have all the luck!” … and all I have to say is, “Yes Way!!!” and “Yes, I’m usually this lucky on a regular basis!!!” … and yes I usually reply to statements with more exclamation marks than the statement maker used.

It was a 2 day non-stop, full-on, dawn to dusk/dusk to dawn, spectacular, extravaganza that lasted for about 2 hours on Saturday afternoon and 1 hour and 45 minutes on Sunday morning.

The first venue was at the city’s Culture Center. I don’t know who figured out where the center of culture in this city is, but I think it should be a lot closer to my place.

I was a bit late, so the crazy crowds were already stacked and racked inside.

If it was your first time at the big festival, you’d probably expect a lot of kimono wearing fan waving mumbo jumbo … and the dancers didn’t disappoint.

They rocked the house with all their amazing hand and foot work. It was like yoga, but with a pulse!

Next came the parasol toting kimono wearing group. There was a lot of twirling and intricate walking around done.

Then there were incredible vaudevillians to entertain the crowd. I think the one on the left tried to do a cartwheel!!!

The “Egg Cap Kids” came on to liven up an already ecstatically frenzied crowd.

Just when you thought things couldn’t get more out of hand, “The Rockettes” showed up to show off their fancy dipping and side-to-side moves … while wearing red shoes and everything.

All the dancers’ fluid movements were accompanied by music from the era before words were invented.
It was like poetry and music combined, but without any poetry stuff.
I guess the dancers were so great they made the songs speechless! 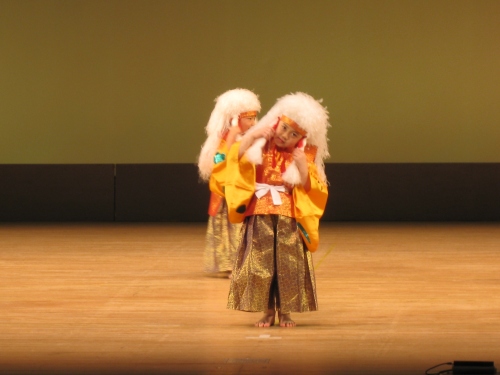 When everyone thought it was all over and were ready to take their video cameras and accost strangers on the street with video highlights, the “White Hair Shakers” came out.

And then it was all over and everyone left sweaty and in silence … probably because they’d been dancing in their seats and lost their voices from screaming so much … or were thinking about what to eat for dinner and why the heating in the hall was turned so high.