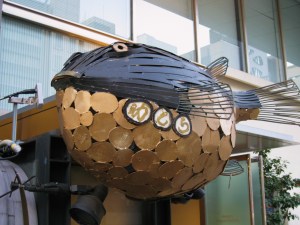 Some people will spend a lot of money to eat something that could possible kill them.

These people are crazy!

They should just come to my place and eat for free.

note: everything you wanted to know about “fugu”, but were afraid to ask can be found here.

double note: I half-heartedly tried to find The Simpsons’ clip about fugu, but found The Simpsons’ introduction in Lego  instead. If you want to see a fine Lego Cake, pop on over to The Tesserae  for a look.

triple note: if you eat Lego Cake are you a demolitionist?

quadruple note: photo taken outside of a fugu restaurant in Yokohama. Is that the coolest fugu sign/artwork you’ve ever seen or what? I wonder if they’ve sprayed toxic paint on it so people won’t steal it!