When I’m Not Blogging, I Possibly Visited … (Part 3)

For most Japanese the first thing mentioned about a trip to Hiroshima is ….

Cooked on a grill and eaten with a metal spatula, okonomiyaki is pure comfort food.

calorie note: “wodge” as defined by planetross: a pasta, potato and lard sandwich.

The next things Japanese people think about Hiroshima are: the Hiroshima Carp baseball team, Momiji Manju snacks, the Miyajima shrine, possibly a tv drama that was shot in Hiroshima … and then just before they have to take off their socks and shoes and start counting out things on their toes, they say “Gen-baku Dome”  Peace Memorial and the A-Bomb Museum. 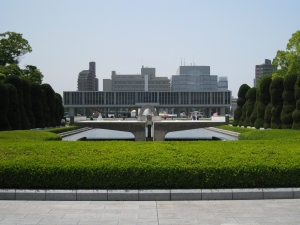 It’s something from the history books … and most people come and expect to be solemn and miserable, but it’s hard to do in a vibrant city like Hiroshima.

There are many paper origami cranes on display as a memorial to Sadako Sasaki in the park outside the museum. 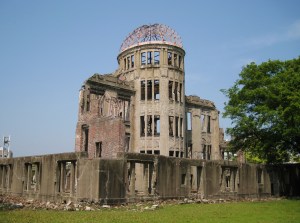 At the far end of the Peace Park there is the A-bomb dome or Gen-baku dome as it’s called in Japan. One of the few building to not be completely obliterated near ground zero on August 6th, 1945.

Here is the dome in better times.

There is a “peace flame” and memorial in this large park. The museum is behind anyone who takes this photo.

It’s only about 50 cents U.S. to go in to the museum. It’s interesting, informative, sad, horrible, depressing, and a great reminder  that life is very fragile.

…  whether young or old; innocent or guilty, life is very precious and needs to be enjoyed every moment.

I’ve visited the museum a few times, but this stopped watch and these words say it all.

After being bummed out in the morning, I was back to being stupid and off to Itsukushima Island and the Miyajima Shrine. A tram and a ferry ride brought me there.

Arriving at low tide kind of sucked for taking pictures. I was very concerned about taking a photo of the bulldozer while the floating torii gate was in the background, but it was not to be.

There was someone under the shrine digging out excess sand and shooting it out to the bulldozer driver who unloaded it and then scooped, scraped and relocated it to another area. I imagine the guy under the shrine must have been a college student.

Then I was concerned about taking a stupid photo of the floating torii gate on my head.

Then I pretended vandalism.

Then there were monkeys. It can’t get any better than monkeys!!! … can it??? 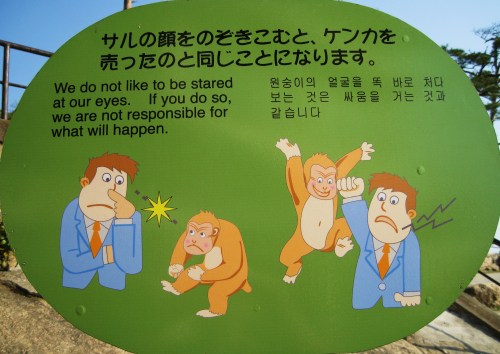 Then I wished I had this on a t-shirt.

Then there was a photo opportunity.    Hey! I call them as I see them!

Then I wanted this sign as a bumpersticker on my van.

Then the tide was really out at the shrine and I touched it  … and everything.

After that it was back on the ferry and tram, a big okonomiyaki feed and a few beer … and then off to the next destinaton.

note: I may just put on a silly short stupid entry tomorrow … as obviously I don’t have essence … because time is of that stuff … and I don’t have much of that possibly … tomorrow.