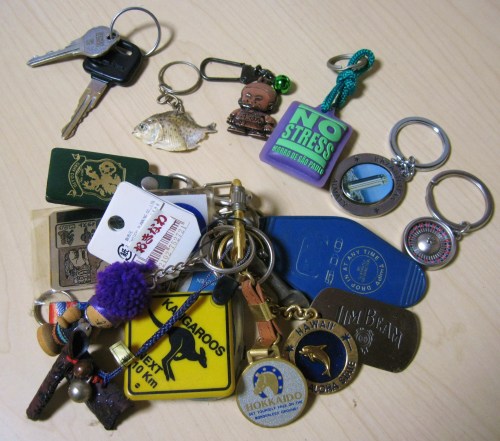 I’ve acquired quite a few key chains in the last 10 years or so.

Most of them were presents from friends or students who went on holidays: Saipan, New Zealand, Australia, other places in Japan, and Hawaii seem to be popular destinations for Japanese people for some reason.

I’ve bought a few as keepsakes from places I’ve visited: the “No Stress” one from Morro de São Paulo, Brazil supposedly floats, while the real piranha one would fall apart if you stuck it in your pocket, but it’s cool anyway.

Others just seem to have appeared magically with bottles of whiskey.

For me, the only problem with having so many keychains is … I don’t use keychains.

My keys are in the top left of the photo.

note: I should open a keychainstore.

double note: people seem to give me a lot of gloves as well, … but never those cool doctor ones.

triple note: the only person I know with an authentic keychain is Mr. Pettit. 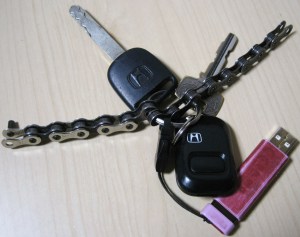 Today I read that Cindy Lauper was on tour in Japan when the earthquake/tsunami/nuclear reactor stuff was happening … and she just kept on touring for another week. She goes to the head of the class.

7 responses to “Key Balls And Chains”